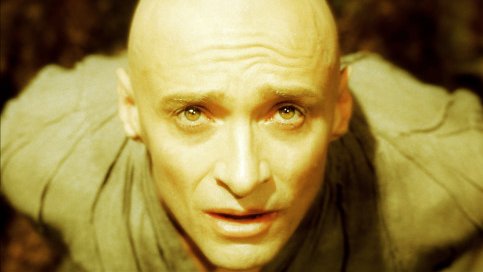 Tommy prepares for the ultimate lesson in personal mortality.

What if you could live forever?

Writer and Director Darren Aronofsky has a fierce and original talent, as amply demonstrated by his previous successes, Pi and Requiem for a Dream. Had I realised that The Fountain was another one of his, then perhaps I would have been marginally more prepared for it. In actuality, caught dozing my way through an aeroplane flight one sunny afternoon, I was somewhat blindsided by this millennia-spanning story of love, death and rebirth.

The thing is, it doesn't feel like Aronofsky's previous titles. It does feel a lot like other audacious, wildly sentimental tales, such as Crowe's Vanilla Sky, or Soderbergh's Solaris. Doubtless it will polarise viewers. Those of a more cynical bent will snigger at the pretentious triple-stranded narrative, encompassing characters separated by a thousand years, caught in the endless struggle for life amidst death. Good friends of mine, no doubt, will leave theatres in droves, gagging at the naïve rediscovery of the original Garden of Eden's tree of life in the jungles of Guatemala, steeped in Aztec legends of sacrifice and afterlife. Many will cringe at the grand and operatic scope of the emotionally crushing, drug-inspired finale, as Hugh Jackson, now a 25th century space-faring guru, full-lotuses headlong into a nova for the ultimate lesson in personal mortality.

But for every person who just can't stand a movie like this, there will be others who are bold and foolish enough to fall head over heels for its brand of unrepentantly teary-eyed intensity. For those bright-eyed space cadets, who have immense reservoirs of willing suspension for a story that is at once both enormous and intensely personal, who strive to enlarge their conciousness, or to be unafraid of the darkness in our hearts, and most especially for those who are or who ever have been in love, I can unreservedly say that it's the most amazing film of the year. And if you love it too, then then maybe one day we will find, that "together, we can live forever."

Well, maybe. But at the very least, it would make for a smashing film.

Update: It wasn't until 6 weeks later that I got to find out what was really going on.