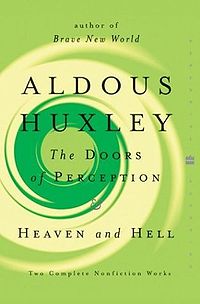 "...the draperies are living hieroglyphs that stand in some peculiarly expressive way for the unfathomable mystery of pure being. More even than the chair, though less perhaps than those wholly supernatural flowers, the folds of my gray flannel trousers were charged with 'is-ness.'"

A fairly standard trip report then, albeit one from a relatively astute and articulate 1950s traveller. Presumably this will therefore be exactly as fascinating or tedious as the prospect of such a thing leads you to expect.

Update: I forgot to mention the amusing trivia that this is the essay Jim Morrison's band was named after. Did everyone know this except me?

Rating 6/10 : No truer nor more deeply insightful word has ever been written in the English language. Yawn.