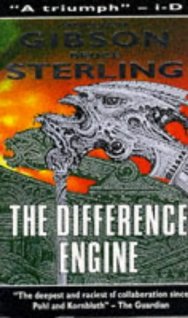 by William Gibson and Bruce Sterling, 1990

A quick re-read, inspired by a recent visit to the Science Museum, where we were enthralled by our meanderings around various astonishing artifacts:

I was surprised to learn that the failing of the device was not, as I had previously heard, due to the inadequate manufacturing tolerances of the time. Recent examinations have demonstrated these to be more than adequate. Instead, the lengthy and costly extensions to the project, leading to its eventual failure in an ocean of debts and soured relationships is nowadays blamed on the project suffering from 'inappropriate management'. Interesting to see the nascent software industry starting out as it was destined to continue.

It was, of course, this last item at the museum which inspired me to pick up The Difference Engine paperback again, an alternate history novel in which the authors indulge the fantasy that Babbage's project had been a success, and the British Empire, in the upheaval of a steam-powered information processing era, underwent a series of meritocratous social revolutions, and as a result was better equipped to continue its expansion across the globe.