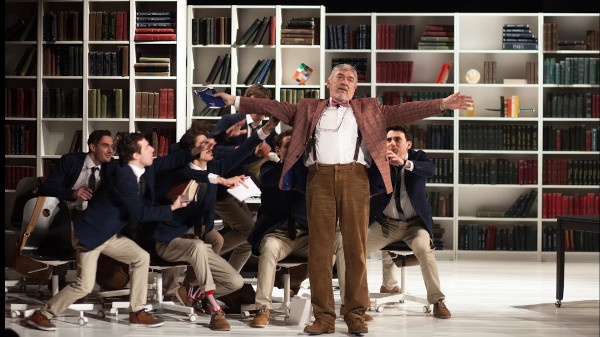 After a lengthy run at the National Theatre, and then a national tour, this production marks the play's return to the West End, enlivened by a new cast.

The tale revolves around a class of bright and boisterous schoolboys, under the tutelage of two particular teachers; Hector, a middle-aged General Studies teacher, who spurns the concept of curriculum and examinations in favour of individual intellectual exploration:

"The school gives them an education. I give them the wherewithal to resist it."

versus a younger, more efficient History teacher, focussed on a more prescriptive methodology, providing a palette of intellectual sleights-of-hand designed specifically to get them through the Oxbridge entrance exams.

Director Hytner effectively introduces the play, and many scenes within it, using short video clips of the characters within school settings, set to gleefully evocative gems of 1980's pop. This immersed me in memories of Grange Hill and my own school days even before the first line, and the rest of the play rolled on in a similarly involving, humorous and touching manner. From its initial premise, the story expands to subject the cast to a gamut of emotions, including (spoiler warning) a thoughtful yet uncomplicated exploration of recurrent sexual abuse.

The pupils enact occasional scenes from classic movies with mock gravity, notably selected to highlight the famously British trend of repressed emotion, and in many ways that is a recurrent theme of the play, the way emotions are hidden, redirected and how they then come out.