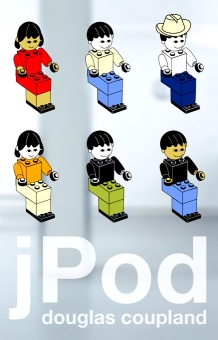 jPod is a flamboyant return to the corporate cube-farms of Microserfs, arguably the site of Coupland's greatest previous victories. Characters reveal their desperation in guilty subversive rebellions against the corporate tyranny that their apathy condemns them to be ruled by. The artificial intimacy of long-term adjacent cubespace leads to the gleeful exposure of each other's sexual foibles, drug habits, and all the diverse pariphenalia with which they parade their various neuroses.

It's an enjoyably postmodern romp, complete with art-school typographical experiments, the recurring appearance of the author as a minor character, and most of all, the infusion of the whimsical philosophies of the GenX protagonists. Even so, I can't escape the feeling that it's a retread, rather than a successor. When he wrote Microserfs, the newfound viewpoints of the digitally-savvy were fresh and exciting, and Coupland triumphantly provided the voice they lacked. Nowadays such views can stand on their own, indeed they are beginning to comprise mainstream society, and observational exposition such as Coupland's has become redundant. When a character notes with surprise that the Kodak company still exists, and wonders how many years it has been since they employed any young people, it might have been a wry and insightful comment ten years ago. Now it's merely tired and lagging, by virtue of harping on about a worldview that the target audience has all taken as read for as long as we can remember.