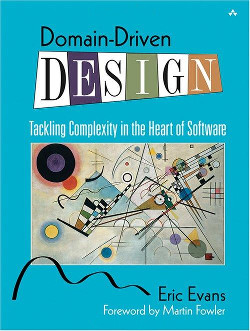 It's a big, dense book -- possibly the most important of the technical books I've read in a flurry over the last few months, catching up after recovering a modicum of sanity in our lives after our kid's first year. I finish it feeling changed, invigorated, and given new direction.

At its core is a simple idea, which sounds neither new nor revolutionary on the surface. Software projects, Evans maintains, should work closely with business experts to create and maintain a domain model. The model might be expressed as a class diagram of core business concerns, and should also correspond directly to a body of code modelling these business entities. This forms a set of core business entities which are clearly analogous to things like the core enterprise entities of the hexagonal or clean architectures.

However it's created, the terminology and notation used in the class diagram (or it's equivalent) should be well understood by individuals on both side of the tech/business divide. In the past I think I've made the mistake of believing that only developers needed to understand it, and therefore the model only needed to be expressed in code.

This model should be displayed prominently, referred to continually, and in a healthy project should very directly correspond to the specialised language that evolves within the organisation. Where the team's language doesn't match the model - for example, your business experts' use of plurals betrays that the cardinality of relationships are modelled wrongly, then the model - and the underlying code - should be aggressively refactored to match reality.

Evans makes a persuasive case that the appropriate management of this complexity at the heart of your software will be a major influence on the success of the project. To be fair, this is a viewpoint that I already believed in, so I was a sucker for all of this. Without an appropriate approach to these central design concerns, over time developers will find they are no longer able to understand the code thoroughly enough to be able to modify or extend it easily, unless they deliberately or inadvertently use design-breaking hacks like redundancy or mislocated chunks of code. This forms a vicious cycle of technical debt accrual, and creates an upper limit on the size or complexity which can be achieved by any project before productivity begins to slump. Other metrics like reliability then also suffer.

To counter this, conquering these central design issues requires a pro-active and multi-pronged effort. Firstly, the existing design must be understood by all parties. In order for this to remain true, the design needs to be kept up to date and be easily understood by new team members. The code must be kept directly in sync with the model, and kept understandable - inappropriate dependencies must be ruthlessly pruned. Simultaneously, the "correct" design must be discovered iteratively, throughout the life of the project, and this can only be done by encouraging continual conversations between developers and business folks to discuss the potential inadequacies of the current design and possible alternatives.

When managed correctly, this lends an agility and suppleness to project. Developers find it easy to integrate subsequent parts of code because they 'fit naturally' into the existing design, and when the design is found wanting, it's relatively easy to modify it to incorporate new concerns.

There are times when I've struggled to convey the message about how the resulting trade off works between time spent refactoring versus time saved over the long term. Evans describes this in an interesting way. Instead of trying to model team productivity by applying a multiplier to describe drag caused by technical debt, he simply contrasts the normal way projects slow down as they become larger and more complex, with a project that instead speeds up over time, as developers, unhindered by a cycle of technical debt, are instead empowered by the creation of powerful and expressive abstractions, which can then be relatively easily reconfigured into unanticipated configurations.

To counter-balance this idealistic hand-waving, the next section dives right into some specific design practices which embody these ideas. These are valuable and insightful, stock-in-trade, such as distinguishing between entity and value types. But many of the ideas were completely new to me, such as the concept of aggregates, which define subsets of the domain model which are always atomically retrieved from (or updated in) a data store.

In short, I really loved this book. It stretched and inspired me. It's in a very small set of books I've flagged to re-read in a couple of years. It's top of my list for 'books to bring in and talk about at work'.

10/10 if you're a programmer, or work with programmers.