We've been brainstorming for products to build. What do you think of this one?

Python Interactive Console in the Browser

One idea is a CPython interactive console in the browser. Client is Javascript, which sends the user's Python to execute in a sandbox on our EC2 instances. Dirigible already has the infrastructure to support running our user's arbitrary Python in a sandbox across our grid - so we'd only need to strip the spreadsheet-UI off to expose this functionality to end-users. 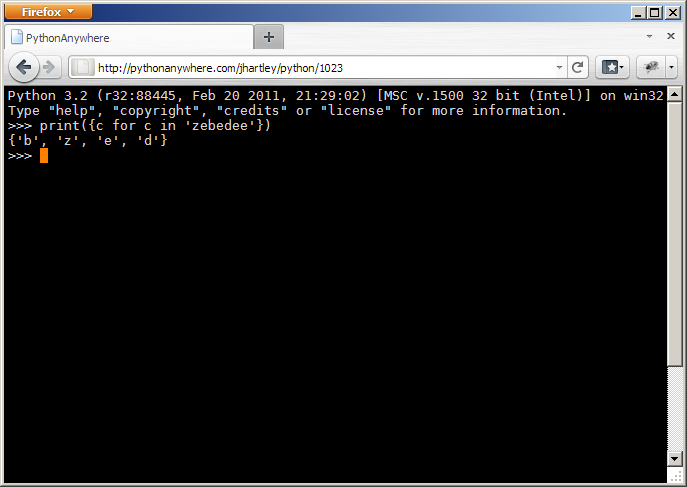 Your console state is persistant - so you could start some investigation, or a long-running statement, then log off, and then reconnect to it later from another machine.

Since the Python runs on our servers, all the client needs is a working browser with Javascript. You could run code from any device - even funky things like iPads which don't traditionally make installing and running Python very easy. Your only hinderance would be the keyboard. Since our servers could be beefy, it would run substantially faster. We could help to support running in parallel across several servers.

We could provide multiple versions of Python - and keep them fully loaded with packages from PyPI - so you could use any combo without having to install anything locally.

There are already some examples of in-browser Python consoles like this, but none of them quite do what we'd hope to do.

We're also thinking of providing really simple tools so you could work on scripts or programs locally, and then run them in the cloud with a single command / button.

Generally we're thinking of running your stuff on our own EC2 servers. Other applications might involve executing stuff on your own servers, instead of ours, but thus far we haven't come up with applications of this that offer much over fabric or a combination of an SSH session and Unix program 'screen'.

Would you use this? What for? Do you think it's totally dumb? I'd love to hear about it.

Most interestingly, would you pay for it? We're thinking free for trivial uses, a few dollars for some advanced features (access to networking, persistance) and scale up to support teraflop computing.