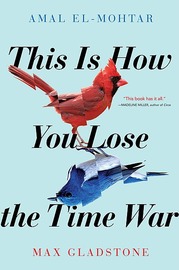 It's a marvellous literary romp, deploying the tropes and language of science fiction to deliver a scintillatingly poetic payload of — dare I say it — credible romance.

The combatants in the Time War seek to bring about historical outcomes which predispose those futures which will result in the generation of their own particular civilisation.

In one future, humans have embraced machine-oriented augmentation, uploads, and all that that implies. In the other, transformation is wrought by biological means, accepting humankind's role as a part of a natural ecosystem, boostrapping the whole to greatness by a ruthless application of evolutionary principles. Each finds the other repulsive, and their existence is mutually exclusive. From our perspective, they appear equally awe-inspiring and terrible to behold.

But, as intriguing as all that is, it's not why we're here. Instead we get the much more personal accounts of two omni-capable antagonists on the front lines. Theirs is a subtle art, weaving probabilities of lasting change through very human interventions - as well as wading knee deep in the dead when occasion demands it, to tip the scales of pivotal battles.

Regarding each other with wariness and respect, from across the gulf of realities, they battle up the threads and down the braids of innumerable possible pasts and futures. Until they begin sending what can only be characterized as letters to each other, albeit often encoded in startlingly — poetically — obscure ways, so as to remain secret from their enemies and their masters.

Around these letters are formed the novel's tight, alternating structure, reminding me of Bank's Use of Weapons. Before you know it, their respect for each other's skills has grown to full-blown giddy all-out love. But where to, from there? Their communications to date are already traitorous - grounds for terminal repercussions. Nowhen in the multiverse are they safe from their respective commanders. Losing the time war would mean they no longer — had never — existed. Winning the time war would mean the same for their opposite number.

At which point, the novel cleverly folds back on itself - these are consummate masters of time, and subtle but decisive influence, after all - to perform an act of escapology, hinting to us that all their previous acts and letters could be re-construed as having left a trail, ready to be exploited once the moment was right.

It's a long way from my usual preference of hard-as-nails SF, but I loved it nonetheless.