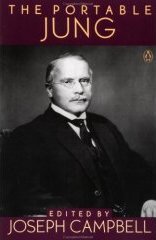 I didn't quite know what to make of Jung when KT first handed me this collection of his essays, many moons ago. Some sort of 19th-century lunatic Freudian psycho-analyst who was a dab hand with a ouija board and sang the praises of ritual sacrifices to the almighty triple-headed hermaphrodite goddesses, right? Something like that.

So it was good to discover that Dr. Jung isn't the wild-eyed loon that I'd written him off as. His attitude is entirely credible and scientific, and while he may invoke triple-headed hermaphrodite goddesses, he does so in an entirely respectable and deeply pertinent way.

His essays are prefaced by a short biography to set the works in a meaningful social and personal context. Of particular entertainment value is the ongoing deterioration of his relationship with Freud, and the corresponding divergence of their theories. This culminated in Freud's desperate plea for Jung's cooperation in ensuring that 'the sexual theory' be established as an unchallengeable axiom in the explanation of all human behaviours. This didn't strike Jung as being particularly scientific, and obviously speaks volumes about Freud - lifelong adulterer - as both a person and a theorist.

Of the essays themselves, some of them resonated more for me than others. I very much liked his explanation of the nature of the subconscious necessarily being the polar opposite to the conscious ego, since all perceptions which do not fit in with the beliefs or attitudes of the conscious mind are dismissed and repressed. This is a natural and normal reaction, and it helps us to maintain a consistent and useful world-view. However, those repressed memories are not erased - they are simply being ignored by the concious mind. The subconscious appears to have unfettered access to these repressed fragments. In situations where the conciousness exercises wilful determination, this leads to a stressful state of cognitive dissonance, in which the subconscious comprises a roiling mass of all the impressions and emotions that the concious mind has rejected. Hence, the tendancy for people to maintain a strident outward appearance which is completely at odds with, and arguably exacerbates, pent-up inner demons. For some reason, the examples that spring to my mind are priests molesting altar boys, or maybe catholic schoolgirls. Not sure if that's a reflection of modern organised religion or my own state of mind, oh well.

Equally interesting is Jung's theory of the collective unconscious - that the religions, myths and legends of the world are united by a handful of common themes, or archetypes, not because of cross-pollination of ideas, but because these themes are an expression of psychological commonalities between all human minds - seems credible and useful. I still have some reservation in accepting Jung's particular menagerie of archetypes as definitive. He may have distilled them from many years studying the world's religions and mythologies, but if you throw enough noise at a filter the result ends up being characteristic of the filter (ie. Jung himself) rather than the noise. However, the validity of the idea in general, and of some of fundamental archetypes, seems unarguable.

He carefully avoids any explicit judgement of whether any religions or myths have any basis in objective reality. Such judgements, he rightly notes, are beyond the ability of the scientific method to evaluate. However, he provides the potential to categorise them all as simply being phenomena of human psychology - ie. they are entirely in our head. This is a double-edge sword, however, for this seeming dismissal rebounds poetically upon us. What were once distant and faintly heard mythologies, are now given a deep and highly personal significance, as they are nothing less than the worldy manifestations of the innermost workings of our own minds, which each of us would fail to heed at our peril.

There are other sections which I didn't find so compelling, such as his concept of synchronicity, but overall it was thoroughly enjoyable and insightful.