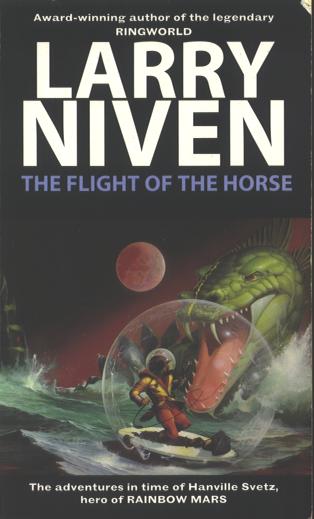 I just got this back from long-term loan to Phil, and I just couldn't resist reading it clean through once again. It's a quick, light read, and I honestly couldn't really justify my love of it to a dispassionate third party. But Niven's stuff, particularly his early short stories like this, are always a nostalgia trip for me, representative of the ideas that got me into science fiction as a kid in the first place. He writes throwaway tales of quirky worlds, but each one is crafted with such a singularly consistent exploration of the logical implications of a single, simple premise, that with hindsight, suddenly complicit in the gag, you can almost see how each story's conclusion grew inescapably out of the very opening paragraphs.

It's very much Niven's modus operandi, and it lends itself well to a book like this, which is essentially a couple of sets of related short stories, in settings that verge on fantasy, but which abide by a strict internal logic that makes them indisputably hard SF to me.

The first sequence follows the fortunes of a 24th century post-apocalyptic time traveller, who is trying his best to investigate the past - our time, and pre-industrial ages - and bring back specimens of long-extinct species. Things never quite go according to plan - the horse he bags has an unexpected horn, and the whale he sought turns out to be a biblical leviathan, until eventually, he figures out the hard way what we the reader should have known all along - his time machine is screwy, slipping a little sideways in time every time he travels back to the past, sometimes a little, to worlds that differ from ours merely in happenstance, or sometimes further, to worlds that never could have been, in which mythical beasts roam and humanity is a very different breed.

The second series explores a similarly simple premise - that countless generations ago, deep in prehistory, when magic thrived and was a practical art in the world, a sorcerer discovers a terrible secret: that magic uses up energy from its surroundings, and that eventually this mana runs out, leaving an area sterile of magical potential, deadly to aged magicians, uninhabitable by mythical beasts. The knowledge is exploited to further various agendas, a vicious cycle that accelerates the process, that we the reader can see will inevitably lead to the fall of their civilisation, and the immeasurable dark ages before our own recorded history began.

It's the sort of stuff that people who don't 'do' SF clearly won't have any patience for. But if you can conjour up a little willing suspension, can overlook the writer's unsubtle early works, then the imagination and clarity of the tales shines through, weaving entertaining worlds of both humour and grandeur.