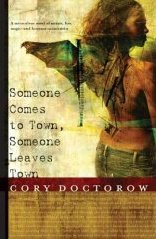 I just don't know about this one. I really wanted to like it. It starts out with an interesting, down-to-earth story about a guy establishing himself in a new neighbourhood, setting up an open wireless mesh net across the neighbourhood, back in a day when this was still a really cool idea. This tale is then peppered with initially disconcerting non-literal sounding references to his family, such as the cliffs and caves of his Father, the mountain.

Perhaps I embarked upon it too casually. It was certainly engaging, but by the last few pages I began to suspect that threads of the plot had eluded me. For example, I had entertained the idea that the fantasy elements of the story were actually the product of the main character's stated intention to write a book, which is otherwise only mentioned in passing here and there. However, the fantasy is woven extremely tightly together with the realistic aspects of the story, such that I can't discern any clear boundary to distinguish between the two. So I'm left wondering if parts of the book didn't actually happen, and if so, which parts? I should have anticipated someone like Mr Doctorow would have to be a terrific smarty-pants in the narrative department, and I doubtless should have paid more attention along the way.

Update 12th Feb: Coincidentally, I just read a short story by Cory, I Row-boat, which despite the awful titular pun, I really liked. However, I've read a bunch of discussion about Someone Comes to Town..., and I don't seem to have missed much that anyone else has been getting out of it. So while I'm looking forward to other stuff by him, I'm sticking by my low rating for this.