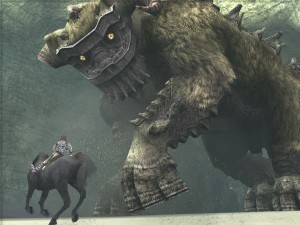 As is common for a title released in the autumn years of a console's lifetime, the programmers at Team ICO have mastered the PS2 hardware, and wring the utmost from it for this virtuoso performance.

The gameplay consists of nothing more than a series of sixteen boss fights between your character and a succession of gigantic mythical creatures, each rising from the landscape upon your approach. Half stone, half furry flesh, these colossi shake the earth as they walk, and facing up to them, armed with nothing but a sword and a bow, elicits a genuine rush of fear, firstly as their size and magnificence become apparent, then as they stand up, and then, finally, terrifyingly, as they see you. Like moments from a piercing dream, playing this game is an experience that will not be forgotten.

It's in this emotive ability that the game's strength lies, and the initial adrenaline is only the most coarse example of it. Those disposed to gallop directly in the hinted direction of the the next objective would be missing out on large parts of what Colossus has to offer, and would be well advised to ease back, enjoy the view, and take some pleasure from the journey. For fully half your time will be spent traversing this epic landscape in search of your next quarry, and the landscape is fantastic, in every sense. Across open plains, rent by canyons and gorges spanned by ancient, elegant arches, past thundering waterfalls, though shafts of sunlight across boulder-strewn forest floors. Cutting through mighty, vine-covered ruins, now occupied only by lizards and hawks.

This tranquil exploration is punctuated by the excitement of the battles, forming a delightful sense of anticipation. The battles themselves are gripping and rewarding, and provides a enough of a challenge to stimulate a corresponding level of victorious elation upon bringing down each of the colossi. Interestingly, as the game progresses, the tone of the animations and solemn music begin to subtly expose these victories for what they are: the slaughter of a magical, unique and irreplaceable creature, leaving the world a more forlorn and empty place. This effectively leverages the player's third-person complicity in the killings, eventually evoking feelings of guilt for your premeditated attacks on your ultimately vulnerable victims. Reflective of your character's determination, heedlessly pursuing an outcome that is hinted at in his own deteriorating appearance, you have no choice but to carry on.

Overlaid on this evolving cyclic structure, a delicate narrative is unobtrusively woven, complete with possibly the most affecting death of a character in any videogame to date. The story culminates by exquisitely dovetailing with the opening of the game Ico (PS2, Team Ico, 2001), making this Ico's prequel (and finally explaining that game's protagonist's stigmatic horns.)

I've said it before and I'll say it again. Videogames are a nascent, immature medium. None amongst us can so much as dream of what they will one day be capable of. Look upon works such as this as history in the making, the first time a human has wrought a creative endeavour such as this, pushing forward the expectations and outlook of the whole industry, and spellbinding a generation.

Alright, we're done here. You may leave. Time for me to begin my experiments with a new subjectivity-proof rating system:

Rating: Position yourself appropriately somewhere between:

10/10 if you wish to enjoy the state of the art in what videogames as a medium are capable of.

0/10 if you are incapable of appreciating beauty or have no soul.