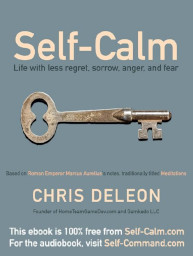 Roman Emperor Marcus Auralias' notes, traditionally titled Meditations, are a foundational text for practical Stoicism. They comprise a multitude of observations and recommendations, grouped into sections such as "Keeping thoughts tranquil", and "Cooperation, collaboration and contribution". They offer advice for living a contented life, with less regret, sorrow, anger and fear.

Several translations exist, themselves dated from through the ages. This book combines them, to synthesize a text which doesn't hew as precisely to the original as a straight translation might, but is instead intended to have the most relevance to modern ears.

Confession: It's taken me months to get through it. Partly this is because I've allowed myself to be distracted by more gaudy and immediate books along the way. Partly it's because I found the best way to read this was slowly. Practically every paragraph is worth reflecting upon, to consider how it applies to my own life, and ponder what practical, specific next steps are implied.

If I had to criticize, it would only be the superficial wrinkle that there's a lot of repetition, such as hundreds of suggestions to not fear death. Apparently the original documents were accumulated over decades of Auralias' life.

You can get the epub for free from the author's gumroad page.