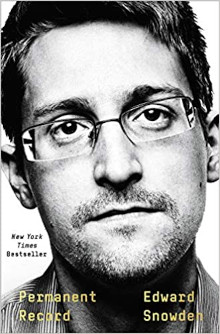 I really enjoyed this memoir. The story is familiar, but intriguing to hear in the characteristically articulate words of Snowden himself.

He recounts growing up as a computer nerd in a family dedicated to military service, punctuated by startling scenes such as being caught in the pandemonium outside NSA headquarters as it was evacuated during 9/11, and the subsequent overreach of surveillance capability that triggered.

He describes the interesting parts of his ascent through jobs, and clearance levels, within the intelligence community, and how he came to slowly suspect — and later confirm — that the government was collecting all the communications and transactions, from everyone who touched a phone or computer, in America and across the world. A vast spying mechanism turned upon the populace, beyond the wildest dreams of the Stasi, who only surveilled one third of their population.

At "Constitution Day" in the office, a forlorn desk in the cafeteria hands out copies of the constitution, which his clearance had required that he, and his colleagues, swear an oath to uphold. He quoted the 4th amendment to colleagues:

"The right of the people to be secure in their persons, houses, papers, and effects, against unreasonable searches and seizures, shall not be violated."

The responses were dead-eyed shrugs - yeah, sure, but what can you do? What indeed.

He describes the dangers of a government given too much power to spy on the everyday lives of its citizens, and the crisis of conscience that slowly lead to his decision to let the American people know that they were being spied upon, and his planning of how to go about it. How he slowly accumulated the hundreds of documents needed to reveal the full extent and capabilities of the spying apparatus. The extraction of those documents, hidden on his person on micro SD cards, concealed in places such as in a Rubik's cube he routinely carried through security. The months long process of selecting journalists who could both communicate the material coherently to the public, and vet the public releases to eliminate the risk to our undercover personnel.

His recounts the preparations for flight, tying up his affairs like a man about to die. Emptying bank accounts, leaving cash for his girlfriend to find. Leaving the house tidy and repaired. The necessity of flight, to avoid a show trial, devoid of any meaningful defense. A whistle-blower is not allowed to argue that their disclosures were civilly beneficial. Even now, when Snowden's leaks have caused Congress to change laws regarding surveillance, or caused the courts to strike down types of mass surveillance programs as illegal, or caused both the Attorney General and the President of the United States to admit that the resulting debate over mass surveillance was a crucial one for the public to have. All these claims would be dismissed by the court as not just irrelevant, but inadmissible, leading to a sentence of up to ten years per leaked document.

And finally, flight itself. A tense series of airplanes and delays, meeting the selected journalists in Hong Kong, selected for being sufficiently disjoint from Chinese rule so as not to taint his revelations with the suspicion of having sold out to China, but still sufficiently lawful, and under the auspices of the distant Chinese rule, that that the American government would not snatch him off the street with impunity.

The indulgence of the Hong Kong government fell apart, as the US filed for extradition. He fled bound for Ecuador, but was pulled aside during a 20-hour layover in a Moscow airport, for a conversation with Russian intelligence, during which Snowden insists he will not work with them, he only wants to catch his flight out. They reveal to him that he cannot leave, since the US State department has cancelled his passport. He is stranded in Moscow airport for 40 days, and eventually granted temporary asylum in Russia. Eventually, his girlfriend — who knew nothing about his plans — recovered from the shock of his unannounced departure, moved out to Moscow to be with him, and then a year later, they were married.