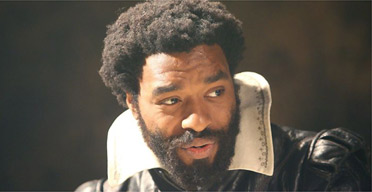 Another of my occasional theatre trips inspired by the Libster, and jolly lovely it was too. Being a bit of a cultural dolt, I've neither seen nor read Othello before, so while everyone else was basking in the familiarity of well-crafted dialog, I was alternately on tenterhooks or else all choked up, bless.

Chiwetel Ejiofor (left), known to me only through his part in the geekspasm of Serenity, presented a warm and charismatic Othello, which served to highlight his later descent into jealousy and madness. The treachery of Ewan McGregor's Iago seemed unjustified within the context of the play itself - is it to be assumed that Iago is motivated by simple racism, or something more explicitly framed which passed me by? Nevertheless, McGregor's Shakespearean debut seemed to me to be a compelling performance.

I enjoyed the director's use of light and shadow to represent various locations, as well as the acoustics, which augmented several of Iago's scheming monologues with an imperceptible bass rumble, which gradually rose to a ominous distant roaring, as though the engines of his inner demons were fit to burst through the walls. I also fancy I caught changes in the properties of a very gentle electronically injected reverb on the actor's voices, to model the auditory properties of each scene's environment, which provided subtle but deeply suggestive cues as to the size and type of each setting, from small stone rooms, large wooden halls, through to outdoor environments deadened by foliage.