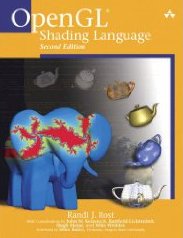 I've had a hobbyist interest in computer graphics for years, but had avoided the technology of shaders these last few years, thinking that they were just another layer of complexity which I didn't need to embark upon while I was still getting to grips with the standard OpenGL API.

With hindsight, I was wrong. I was recently cajoled into getting on board after talking to Mike Fletcher (creator of PyOpenGL) after his talk at PyCon, and now I feel as if I should have read this book years ago. Shaders solve many of the problems I've been happily messing with for ages, in ways that are easier to implement, more powerful, and more performant.

I whined about the Red Book, but this "Orange" OpenGL Shading Language book is brill - just what I needed. Incisive without being overly terse, practical, and once it got into the chapters about applications of multidimensional Perlin noise it got me all hot'n'bothered about computer graphics again. Yay my inner geek!

Update: I started this book fascinated by using vertex shaders to transform geometry on the fly, with little interest in the superficial fragment shaders used to decorate the rendered surfaces with pretty images or lighting effects. Since finishing it, this has reversed: I've become obsessed with noise and Fourier transforms and all the paraphernalia of fragment shaders, imagining relatively simple fragment shader that could, I believe, provide a surface with infinite levels of detail. I dreamed about my old university 'Signals & Systems' type lectures. Uncanny.

Update2: Ohdear. Once I started trying to write anything more than the most trivial of my own shaders, I ran into an unexpected problem. My shaders just wouldn't link. I couldn't figure out why. The book was no help. Google was no help. The error messages certainly weren't any help (thanks ATI.) Eventually I realised that the 'built-in' noise functions which are part of the OpenGL shader language are simply not implemented by the vast majority of graphics card manufacturers - you have to roll your own. Which is not a major deal-breaker, but what is disappointing is that the OpenGL Shader Language book makes absolutely no mention of this in any of the chapters plural in which it lovingly describes the built-in noise functions, along with their characteristics and uses. Perhaps I spoke too soon when praising the book. Maybe it is another case of idealistic OpenGL theory that has something of a disconnect with real world development. Maybe the book was written before this situation came to pass - regardless, it's no bloody use to me.

Rating (oh, how I love my new rating system. Check this one out:)

10/10 if you want to learn the theory of how to use the OpenGL shader language.