I've been riding high on the sheer joy that is Guitar Hero II (PS2) recently. Now that Psychobilly Freakout is the only remaining song for which a five-star review performance is still eluding me, before unleashing the masochistically feverish hard difficulty setting at least, it's time for me to get my ass into gear and learn to play a real musical instrument.

Dithering between piano / keyboard and acoustic / electric guitar, I've decided to take a few week's lessons in each, to see which initially suits me best. Accordingly (Speaking of which, I also find the accordion strangely compelling), I had my first ever piano lesson this weekend. 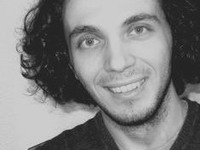 My tutor, Marios, an amiable Greek professional musician with appropriately mad hair, seems like a brilliant choice thus far: I'm sure we'll get along famously, with only the minimum amount of absolutely necessary knuckle-rapping.

Update 14:35: Just remembered: One of the first puzzling things I discovered is that notes on the bass clef stave are offset from the notes on the treble clef stave by a non-integer number of octaves. Hence, a note which would represent 'C' on a treble clef stave is actually an 'E' when drawn on a bass clef stave. Presumably there's a reason for this, but I've yet to hear an explanation that sounds like anything other than a wart on the notation. Can any of my multitudinous readers enlighten me?