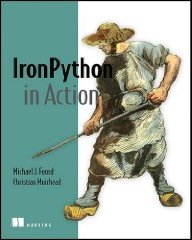 by Michael Foord and Christian Muirhead (2009)

Disclaimer: I'm friends with both the authors and was sent a freebie review copy by the publisher, so I'm bound to be breathlessly gushing in this review. Fortunately, that's easy to do, because the book really is great. (Except for Christian's chapters... Joke!)

Having spent some years working with .NET, and with a series of intriguing personal experiments in Python under my belt, I originally approached IronPython some years ago with a modicum of trepidation. I feared that the weld between the two would be intrusively visible, forming distracting differences from regular Python. I feared for the execution environment, the data types, and perhaps even the syntax itself.

Experience with IronPython showed these worries were needless. I have found IronPython to be a remarkably pleasant marriage - the same elegant language we know and love, given first-class status in the .NET runtime. Gifted with seamless interoperability with other .NET languages, the dowry from such an alliance turns out to be all the .NET libraries in the world, including the substantial and highly capable .NET standard libraries themselves.

IronPython is, to some extent, a niche implementation of a niche language. However, its position seems to potentially be one of importance and strength. Not only does it allow Python programmers to use .NET libraries - and does so admirably, but it also allows the existing legions of .NET programmers to be introduced to the joys of Python. They will fall in love with it, and will be able to introduce it into their workplaces in a way that is politically acceptable. After all, it is now simply another .NET language. Since .NET is orders of magnitude more popular than Python, this could turn out to be an important source of future Python adoption.

This book is aimed to satisfy programmers coming from both the Python and the .NET worlds, and in this it seems to succeed. It starts with quick overviews of concepts from each: 30 pages about Python as a language, and 17 pages about .NET as an environment (data types, events, delegates, Windows Forms, etc) - just enough to get everyone up to speed regardless of background, but without being so verbose as to turn anyone off with a surfeit of material they are already familiar with. Despite being brief, these sections are packed with detail and very pragmatic, focusing on real-world use such as inheriting from existing .NET types, and solving some common problems like creating Windows Forms applications from IronPython.

This style of practical and dense informative content is continued throughout. Straight after the opening sections, we dive right in with another rapid-fire chapter, demonstrating common IronPython techniques by writing a non-trivial application. Woven around this ongoing example, the chapter discusses many immediately important topics, including duck typing, Python protocols, MVC, using Windows Forms to build a GUI, tab pages, dialogs, menus, toolbars, images, saving text files, .NET Streams, text file encodings, Python exceptions and lambda functions. These diverse topics are covered rapidly but thoroughly, giving the reader enough information about each to be able to use them together from IronPython to create a useful project.

Having covered these foundations, the book then moves on to address some specific areas in more detail. The following chapter headings give you some idea of the topics which are explored in depth:

Whew! We're only halfway through! The remaining chapters are equally detailed, but I'm going to start skimming through them somewhat. They cover the interactions of IronPython with more advanced .NET topics such as:

Alright, that's it! There are appendices:

So there you have it. If you haven't inferred already, I learned absolutely heaps from this book, even though it's about a language and environment I've been using every day for years. I think I can say without any equivocation that this is the best IronPython book in the world. If you're a .NET person who is curious about Python (and believe me, you should be), or if you're a Python person who fancies .NET - maybe for DirectX or Silverlight or any number of other wonderful things, then you should absolutely go directly to the IronPython in Action book website right this second and buy it.

What are you still doing here?

10/10 if you already use, or are curious about using, IronPython - then you need this book.

0/10 if dynamic languages make you break out in hives, or if .NET makes you think of Darth Vader, then you shouldn't touch this book with a barge pole.