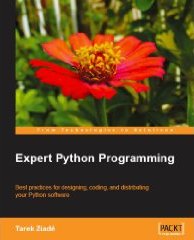 Publisher Packt were nice enough to send me a copy of this, so I'm completely biased. Fortunately for everyone, I really liked it. But I have to say that. But I really did!

I've been using Python for a couple of years now, but only on a single project, so while there are parts of it that I know very well, there is doubtlessly a lack of cross-fertilisation in the things I am exposed to. So I was looking forward to this book.

Surprisingly, for such a straightforward-sounding title, it is not at all what I expected.

What I expected was analyses and illustrations of using Python's more powerful features: dynamic designs; creating classes on the fly; functional programming styles; closures and metaclasses.

Sure enough, there is an early couple of chapters devoted to advanced language features. First up, iterators, and generator expressions, and then the .send, .throw and .close methods on a generator, which induce the yield statement to return values or raise exceptions. This is then used to handily illustrate coroutines as a method of co-operative multi-tasking without the calamity involved with getting all multi-threaded. It's exactly the sort of feature I'd pondered writing for myself for a personal project, oblivious that the language provides it out of the box.

Interestingly, this list has only one item of overlap with my expectations. Tarek has done a good job of choosing important but sometimes overlooked topics, and while, inevitably, I was very familiar with some of the things he talked about, other sections were complete revelations for me.

However, this is only chapters 2 and 3! The rest of the book expands in scope beyond Python the language, to look at the environments and tools that make up the Python ecosystem. In a way, this sounded less intriguing to me than the computer-science oriented exploration of language features that I had expected. But having finished the book, I now realise that it was exactly what I needed.

The opening chapter goes through installing Python - a topic which I didn't think needed discussion. But Tarek goes on to cover using MinGW and MSYS to set up a credible command-line environment under Windows. I've always used Cygwin for this in the past, and trying out MSYS (coupled with the project Console) is a breath of fresh air.

This cross-platform development environment is then rounded out a little by installing and using things like setuptools, and some thoughtful notes on integrating Python development into editors like Vim and Emacs, or an IDE like Eclipse.

The rest of the book covers some of the major tools in the Python world.

I've never previously been forced to get to grips with Distutils. Applying lessons from the book to a personal project got me completely up to speed with using Distutils to create packages, making source and binary distributions, using eggs, and distributing dependant packages that together make up an application. The only thing really missing from this is maybe generating stand-alone executables using py2exe (for Windows) or py2app (for Macs), although this idea is mentioned in passing.

The following chapters give competent overviews of a wide variety of topics:

8. Version control systems: centralised, illustrated by Subversion, or distributed like Mercurial. Continuous integration using Buildbot. Presumably you will either already know these inside-out or else will lap them up hungrily.

9. Waterfall, spiral and iterative project life cycles. I'm not sure that waterfall is really used by anyone except in case studies of 'what not to do', and I'm also not sure how you could be a developer without being aware of this, but maybe that's precisely the point: You can't be a developer if you don't do this. This chapter then covers setting up an instance of Trac and using it to manage a project's deliverables, defects, and milestones.

10. Documenting a project using ReStructuredText and Sphinx, and including hints on good technical writing. This caused me to completely revamp the content of my small personal project's documentation, and as a result it is both much improved, and shorter to boot. Wins all round.

11. Test-Driven Development. This chapter would be a superb overview of the topic for someone who didn't know about TDD. Although I use TDD extensively at work, I've never used nose, fearing that getting to grips with it might be too intrusive or disruptive. In fact, it is seamless to begin using it in a small way and slowly extend into its more advanced features as and when you need them.

12. Optimisation : General principles (ie. don't) and profiling techniques. I had never used the cProfile module described here, having just whipped up homespun profilers on-the-spot whenever I needed them, and it's a valuable addition to my arsenal.

13. Optimisation : Solutions. Big O notation. Correct use of different collection types. Multi-threading, multi-processing, caching. Not much that is tremendously new to me here, but it is obviously a huge topic to cover in a a single chapter, and it covers the bases competently.

14. Design Patterns, and how they apply (or don't) to Python. It has been said that design patterns, as fundamental and necessary as they are to a software engineer's mindset, are a symptom a language's lack of [expressivity]{#query .query}. You shouldn't have to write huge gobs of code to express simple conceptual relationships. Although Tarek never explicitly says this, to some extent it is born out by this chapter. Trivial (and much-maligned) ideas like the Singleton, after a page or two of alternate implementations, boil down to simply 'use a module', i.e. zero lines of code. Slightly more complex patterns such as Visitor, are only a few lines. It is still useful to discuss and name patterns, but on the whole reference implementations are so trivial as to be unnecessary, except perhaps as the most concise and precise method of illustration.

The book overall, then, is a grab-bag of different topics. Each chapter could clearly be expanded into one or more whole books. As a result, no part can be covered in very great depth, but Tarek does an admirable job of getting the reader up to speed enough in each area that they can be self-sufficient and direct their own learning from that point.

As as result of the broad scope of the book it serves as a brilliant annotated laundry list of 'things the Python developer ought to know'. While there will doubtlessly be some sections that you are already deeply familiar with, if you have any interest in discovering your own deficiencies as a Python programmer, I can highly recommend it.

Rating: 7.5/10 - Made concrete improvements to the way I work every day.