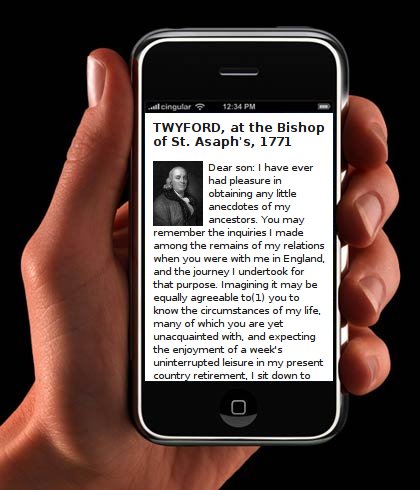 I read through this to assess the iPhone (many thanks to the generosity and resourcefulness of a certain Mr Smithson) as an eBook reader, and found it surprisingly good - certainly the best device I've tried to date, surpassing even the silky-screened PSP. The text is clear and relaxing (better looking than the hurried mock-up I Gimped together on the left), page turning or scrolling through chapters are both unobtrusive and highly functional. The whole experience was very pleasing - I could read comfortably off the iPhone for hours on end. I'm reminded of the post I wrote back in '98: "I'm going to try out this new thing called Napster..." The revolutions begins here - let the book-burning commence.

As for the words themselves, they were a very entertaining read. Mr Franklin is evidently a singularly able individual who led an interesting life full of achievement. I'd never before taken stock of just how very industrious he must have been to straddle so many spheres of influence, a fact which he misses no opportunity to remind us of. His every week is seemingly filled with some new scheme for relentless self-improvement, impressing local dignitaries with his perspicacity and diligence, or else compiling lists of virtues, so that he might regularly apprise his behaviour in their light. I noted with wry amusement the suggestion by a friend of his to add 'humility' to his list, of which Franklin reports "I cannot boast of much success in acquiring the reality of this virtue, but I had a good deal with regard to the appearance of it." Quite.

However, it is mean spirited of me to begrudge him that trifle in light of his achievements, and in particular, the spirit of honesty and justice with which he undertakes every aspect of his life. I'm a firm believer that the winners write history, and have on more than one occasion pondered the lofty ideals of the founding fathers as a superb marketing spin to popularise an act of treason. However, whether it was spin or not, the lofty ideals stuck, bequeathing us the better part of the disposition of modern America, for which the Western world owes him an unending debt of gratitude.