Written by Alejandro Jodorowsky, art by Jean Giraud (aka Mœbius), 1980-88

I grabbed this in the English translation from the original French, having been intrigued by the Pocket Essential Alan Moore's description of it as a contender for "the best comic in the medium's history".

This creative pairing also worked together on the unproduced 1970s movie of Dune, the one whose cast was to have included Salvador Dalí, Orson Welles, Gloria Swanson, and Mick Jagger, and presumably would have been pretty trippy - I mean, even more trippy than the David Lynch one turned out to be. The artist, Mœbius, has had a long and glorious career, knighted for his art in his native France, and he worked on other movies such as Alien, Tron, The Fifth Element, and The Abyss.

Echoes of all of these are visible throughout the consistently stunning artwork of The Incal, and it has been explicitly noted as an influence on the expansive decayed futurescapes of Akira and Blade Runner, and the flamboyant visuals of the Star Wars prequels.

The writing really swings for the fences, a sprawling tale of a reluctant hero's journey, taking in societal commentary, intergalactic travel, spiritual transformation, iconic incarnations of good and evil, and a deep thread of mysticism.

For me, it does have a very evident "foreign" feeling - small social nuances with which I'm unfamiliar. Equally clearly, this is part of its exotic charm. And while the story touches on, perhaps even consists of, deep themes, it doesn't so much articulately explore them, but instead simply incorporates them. This is not a comic for people who are not already comic fans.

In lesser hands, it might have been undisciplined. But wherever the story roams, the artwork is endlessly enthralling. I especially liked the touch of protagonist, John DiFool, starting out distinctly ugly, but being rendered more handsomely on the rare occasions he manages to get in touch with his more noble aspects. Jodorowsky manages to keep it all together, bringing it around to a splendidly satisfying theatrical close. Bravo!

This was just wonderful to read.

The near-future scenario is revealed in a compellingly minimal way, teased in minor details. Eventually we piece together an epidemic of children without siblings, born into a competitive, authoritarian society. Higher-rank parents are able to purchase artificial friends, to help with the rigors of socialization. Klara, a newly activated artificial friend, demonstrates a lack of experience in dealing with human situations, but her efforts are unstinting, to understand what is going on within the family to whom she is sold, and do her best for them. Her earnest naivety as a narrator only serves to magnify the emotional impacts of the story, as her keen but inexperienced observation conveys everything we need to know about the dysfunctions of her tragic new family. She describes herself as feeling emotions, so the story is partly a discussion of what it means to be concious, to feel, as the humans around her are forced by circumstance into desperate schemes that expose the self-protective aspects of their love.

For all that, though, I'm not sure what to take away from it. Clearly the author is very skilled. It seems likely that metaphors are at work here. But, lunk that I am, I'm unable to discern what they are.

I'm fairly sure that the "boxes" Klara sometimes relates her perceptions being divided into are just stylish flair - a reference to the ways in which her brain works differently from ours, calving off processing into separate processors, or some-such, which comes to the fore when she is under stress, or deciphering complex emotions. I don't think this strikingly non-literal aspect is indicative of any deeper symbolism.

Sometimes, when I fail to pick up on metaphor, it's because religious allegory is involved. Beyond tales of mere personal transcendence, my brain just isn't wired that way. I can see that Klara is in many ways an innocent. Free not only of wrongdoing, but also of wishing harm, and - being made, not born - of original sin. On the literal level, this is emotionally resonant, especially when Klara's heroic contribution to the family is rewarded by being uncomplainingly discarded, like an appliance, at the end of the book.

But is this related to the other big clue about things I'm not picking up on - the title? I'm at a loss of what to make about Klara's relationship with the sun, which is a central plot point. Was Klara's bargain with her Sun god literally answered by a special burst of healing light, that saved her family's child from terminal illness? Certainly that is how Klara relates it. Could she perhaps have been imagining this? Might the recovery have been fated to happen anyway, and Klara's association with the burst of sunlight was all in her head? But the text tells us that the rest of the household are awestruck by the brilliance and beauty of that particular sunbeam, not just Klara. Later on, the questions Rick asks of Klara show that, although he does not understand, he has guessed the significance of the moment.

So. Klara the innocent's anthropomorphized Sun god's healing powers are real, and He answers her prayers to save the life of a child. And I don't know what to make of that.

Fortunately, I'm in good company. A quick search does yield intelligent writing about the book, but I don't see anyone coming up with aspects or metaphors that I've entirely overlooked - although that is usually quite fruitful when I search about other books that puzzle me. So I venture that I'm not the only one who doesn't get it. I've never before memorized the complete set of tricks needed to solve a rubik's cube... until today! My first completion with no reference to my notes took 3 minutes and 5 seconds. Wine and chocolate motivators as pictured.

Rubik's cubes first came out outside Hungary in 1980, when I was 9. A year or two after that, I got my hands on an nth generation photocopy of handwritten instructions for solving one, derived by a mathematically-inclined friend of a friend of my Dad. (The things we used to do before the internet!)

I memorized the first few phases, so have always been able to do the first two layers. But the last parts of that solution involved remembering a couple of 15 or 20 move sequences, which apparently ten-year-old me got bored of, or distracted from, before ever committing to memory.

It turns out that the modern "beginner's method" that I'm reading about today is considerably simpler than that, and is much easier to understand and memorize. So now that lingering childhood inadequacy is vanquished. But will I continue with the series? I think... not. Which is actually a good thing - there are just so many other things I'm dying to read right now.

Got sick of navigating the limitations of various online services to create animated gif memes, finally figured out how to do it manually. Not a universal process, just what worked for my situation. (Which is Ubuntu 21.10, "Impish".)

All of of the ffmpeg invocations could probably be combined into one, but I show the commands as I used them, as I was figuring each step out.

I only want the final few seconds. To remove the start of the video, keeping from 6.5 seconds until the end:

Args to ffmpeg are position sensitive. Specifying '-ss' (to split the file) before the input ('-i') can't create the split at an accurate location, since it has to guess whereabouts in the file the given timestamp will occur. But putting it after the input (as done here) means it can split accurately on the given timestamp, since the file has been processed by the time this arg gets actioned, so accurate timestamp/frame conversion is known, at the cost of having had to process even the parts of the video that are then discarded.

Vcodec of libx264 is specified because, according to stackoverflow, "scenes in mp4 are broken", whatever that means, and specifying "copy", as most people do, gives me an output with no video, only audio.

This results in a three second, 217KB .mp4 video file. (the following is just an image of it). To crop out the black bars from the top and bottom:

Here, we crop it to the input width "iw", and 365 high. In the absense of any offset ordinates for the crop, ffmpeg defaults to centering them, so this 365 pixels are taken from the (spatial, vertical) middle of the video, which is exactly what we want.

This results in a three second, 220KB .mp4 video file.

4. Resize and convert to gif

This results in a grainy-but-passable three second 750KB animated .gif:

The file size can be smaller, if you care, most easily by splitting a shorter video clip, reducing the frame rate, or reducing the 'scale' in this step.

Alternately, this could be done using ImageMagik's 'convert', but the result of that was a very large (10MB) file and played very slowly, and I wasn't immediately sure how to fix that.

The '-coalesce' option removes all the .gif optimizations, then we apply the text labels, then the '-layers' option re-applies optimizations. Without this dance, the text is all twitchy and messy.

Voilà. Imagine sending it to a co-worker who is taking on a difficult task, like making changes to that thorny section of the codebase that nobody likes:

Subnautica, and its icy sequel, "Below Zero", have perhaps been my favorite games of the last few years. The majority of their run time takes place under the colorful waters of an alien ocean. It's been a joy to sit side-by-size with Zander for tense scuba cave dives, or piloting vehicles through vertiginous underwater cave systems, headlights straining through the murk to reveal wonders. It has inspired cake.

Part of the games take place on land though. I started drawing a map of Below Zero's Glacial Basin region just to keep track of where we'd been. To make sure we visited all the locations, found all the MacGuffins (I'm looking at you, pesky antidote), and experienced all that there was to experience.

But as those goals approached completion, I finished drawing it because it had become a therapeutic experience. Happily exploring away, mesmerised by the scenery, avoiding hostile wildlife, uncovering the ruins of ancient alien artifacts. Reckoning distances by eye, scribbling down what we found, updating and correcting the map as we went. Being lost in the experience. Simply a joy.

Reddit is encouraging me to tackle the tricky Actic Spires area, too. <Rubs hands>... 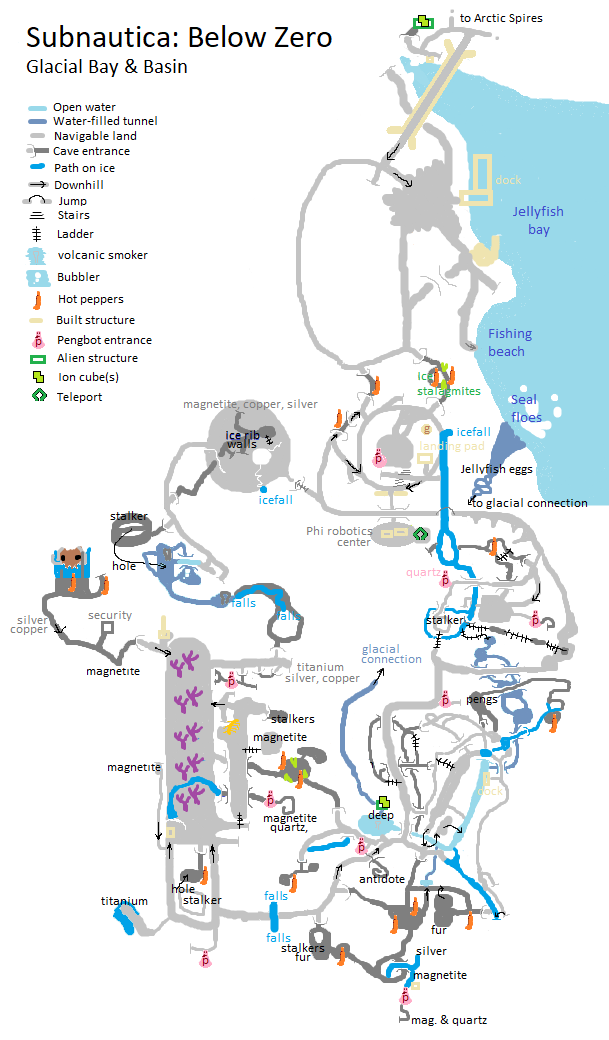